Hello Friends sorry for the late post about the facebook phone new , all this day i m gathering some information regarding this device finally time to write about this device. 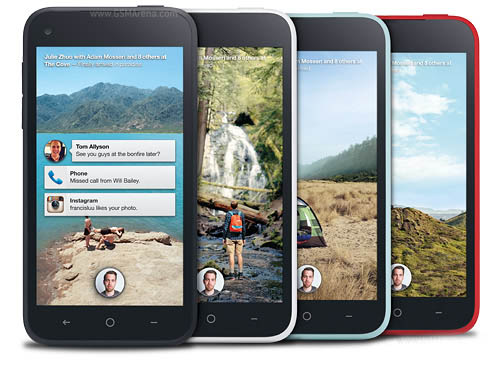 Once we turn on the Phone we can access ok Facebook Cover theme. Can scroll the screen for check out the timeline and it s keep scrolling in the 5 or 8 sec time gap. Facebook trying to keep Engage with with them. just to double tap the screen to like the pic and at the mean time we get the commenting icons to comment on friends pic and see the other comments. Notification function  it shows the android updates and gmail updates fb notifications etc. facebook team build this app in top of android so intrena l use same android. OS Jelly Bean. but for the moment we have no idea about battery usage and other performance for now we got he spec of this device.

The First is a very stylish, well-built phone, once again proving that HTC has a penchant for design.

The Chat Heads feature can best be described as the roommate who quietly knocks on the door and then cracks it open to see if you’re busy. Chat Heads try hard not to distract you so that you can continue to multitask, but they want to subtly alert you that someone has sent you a message.

I can see the placement of the micro-USB port becoming a bit of an issue in situations where the phone is charging and it needs to be laid horizontally or placed in a car holster for navigation. It’s also awkward trying to type with both hands when the phone is plugged in.

The screen size wasn’t much of an issue except when reading e-books and text-heavy webpages. Fortunately, there is an option in the Settings menu to make the font bigger, which actually helped significantly.

In performance tests, the First had results similar to the Samsung Galaxy S III. It appears that Home doesn’t use up that much battery life either, despite its ingrained status within the Android operating system. Overall, the handset was fast and speedy. It didn’t feel like a mid-range handset.

Because of its small size, the First is a pleasure to hold. It nestles comfortably in one hand in a way that few popular Android phones do these days.

The screen is very difficult to see in bright sunlight. The First’s camera feels like a throwback to an earlier age when smartphones were nigh-useless in the dark.

Video on the First is equally forgettable, amplifying hand-shake and displaying the jelly movement effect so common on low-end cameras.

The HTC First is running stock Android 4.1.2, almost completely unpolluted with apps from AT&T or HTC.

If you’re a Facebook devotee, or just want a cheap phone that runs well, by all means check out the First (but test the camera before you leave the store). If you absolutely want a smaller-sized Android phone with LTE, the First is probably the best option out there right now.

I found Facebook Home to be easy to use, elegantly designed and addictive. Although I’m a regular Facebook user, I found that, with Home, I paid more attention than ever to my news feed,

The idea is that during spare moments—say, while waiting in a line—you’ll get immediately hooked by Facebook.

Facebook Home blocks the one-step camera icon some Android phone makers place on their lock screen to allow you to take pictures without first unlocking the phone.

With Home, Facebook is essentially staging a land grab of Android. Because it’s so dominant, it makes it less likely that a user with limited time will launch Google products that compete with Facebook, such as Google’s own social network, Google+, or rival services from other companies, such as Twitter.

Since the First was built to impress the Facebook-savvy, we shouldn’t be surprised that this is one of the most playful-looking handsets HTC has ever made.

We also need to point out the lack of an LED notification light, which seems like a huge oversight given Facebook Home’s heavy emphasis on alerts and other notifications.

Unfortunately, there’s no option to add widgets or folders.

By far, our greatest concern with Home is the impact that it could potentially have on data usage, since it dynamically updates Facebook’s news feed in the background. Fortunately, Facebook includes a three-tier data usage and image quality setting (high, medium and low). The toggle becomes handy for smaller data plans or if you’re getting close to your limit, but oddly a WiFi-only option isn’t available. In our testing, we consumed 93MB in four days on the medium setting; at that pace, Home would snatch up 698MB in a month. Think about it this way: if you have a 2GB plan, Facebook Home would take up more than one-quarter of your data allotment, on the medium plan alone. Now imagine how much the high-usage scenario destroys the average consumer’s data plans. Use Home responsibly, folks.

Fortunately, the 2,000 mAh Lithium-polymer cell was enough to keep us going for 14 hours of solid use, with Home running on medium usage the entire time.

All of our cellular connections have been consistently good and the volume was more than sufficient.

It’s aesthetically pleasing, and surprisingly polished for a 1.0 product.

In its current state, Home isn’t the best fit for productivity-minded people, although it does offer a bit of mindless entertainment for anyone just looking to burn a minute or two throughout the day

To put it bluntly, Home won’t convert non-Facebookers into believers, and it won’t encourage people to sign up for the service; it will be a failure in that sense. It may, however, turn casual users into more habitual Likers, commenters and posters, and we have a feeling this is exactly the kind of success Facebook is hoping to reap. 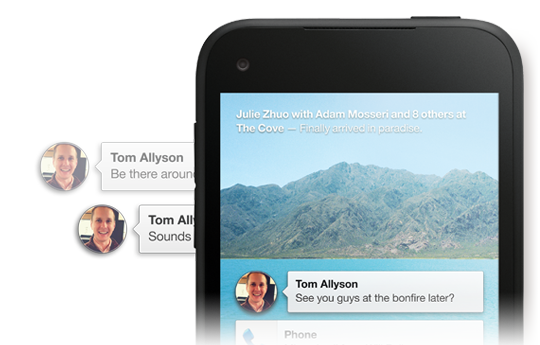 Facebook has made Android faster by removing a lot of crud that typically ships with Android on carrier-branded phones.

For a service that is supposed to bring us updates in real time, this isn’t close enough. You can actually feel the slow speed (and infrequency of updates) of the feed when you compare it with the desktop feed which moves at a faster pace.

The phone has a soft-touch rubber design which is easy to grip and it is something I appreciate because my phone keeps dropping from my hand.

On the app launcher: If it sounds confusing, that’s because it is. In removing the app-launching function from the Home screen, Facebook has wound up having to reinvent the way you open programs on your phone, and the result feels like a hack.

Chat Heads are fun and effective, but Facebook’s engineers appear to have overlooked one small detail: Chat Heads are useful only when you receive a message. How are you supposed to initiate a conversation? For that, you have to duck into your app-launcher screen and fire up the Facebook or Facebook Messaging app.

What does Home add, really? Yes, the ability to see incoming posts on your Home screen; you save one tap. But is it worth losing widgets, wallpaper, app folders and the Android status bar in the process?

It’s really good. I like the HTC First with Facebook Home (the official name, I think) more than the Nexus 4, but less than the iPhone 5.

[On Cover Feed] It’s surprisingly addictive…because you can swipe to scroll through these images/statuses all without unlocking the phone.

I think Facebook has really nailed the interaction element on the home screen. I actually wish I could use Instagram and other visual feeds this way as well

On top of that are the beautiful, elegant notifications that Facebook has created. Simply put: I like them more than both Android and iOS notifications. They feature big, clear app icons (or a person’s face if it’s a Facebook notification) and a snippet of the message you’re receiving.

I’ll be curious to see Facebook Home running on other hardware like the Galaxy SIV, but I think the fact that you won’t be able to get third-party notifications would be a deal-breaker for me.

[On password entry]: This is where things start to get a little weird…sometimes you’ll be asked to enter your password from the app list, sometimes before it.

Even weirder is that you can actually do a few types of Facebook actions — both liking and commenting — without entering any password. In fact, there’s no way to password protect these actions, as far as I can tell. Someone could definitely take your phone and leave comments galore on your friends pictures, no questions asked.

Chat Heads. Awful name not withstanding, this is absolutely how messaging should be done on a smartphone. Rather than making you open a separate app to get and respond to messages, Chat Heads put a user’s face…on top of whatever you’re doing on your phone.

[On design flourishes] These touches, while seemingly trivial, give me the same type of feeling I get when using iOS. You can tell that a lot of time and care has been put into the user experience here and it shows, in spades.

Still, it’s hard to believe this is only Facebook’s first take at Home. This is a very polished and impressive first entry into the space